Having built a new house on the property, they realised the old generator was not going to provide them with enough power and so embarked on finding a better solution.

The client previously lived in a caravan on the farm with limited power needs. However, having built a house on the land, they soon realised they needed a more reliable and powerful solution.

The previous generator required a lot of manual interaction. The client had to turn it on in the morning, then again at dinner time and again in the evening. What’s more, just before going to bed they had to go outside to switch it off. This routine required the client to ensure any tasks around the house that required power were done within these times. They were completely restricted. What’s more, they had to go backwards and forwards to turn the generator on and off in all weathers. And, during winter the generator would have to be on for a much longer period of time, which ultimately used up a great deal of diesel, costing them a lot of money.

Having come across an advert in a farmer’s magazine for Powerguard, they decided to engage with us to assess their needs and come up with a solution. They obtained details from us and our solution and were able to compare this with a proposal from the National Grid, in which case it was to cost £17k to install and there was a waiting list of 6 months.

The ideal solution would provide the client with electricity 24 hours a day, seven days a week. It would not only power the house, but the lighting around the farm, so essentially, it’s a domestic and business solution. Due to the location of the property, it would be ideal to have a solution that is simple to manage, reliable and efficient.

Having assessed their needs, it was clear they needed a larger generator than they previously had, along with a much larger battery. To ensure optimum efficiency and keep costs to a minimum we also included a wind turbine as part of the solution. Further to this, it was important that the solution we implemented would need little to no input from the client to work.

With the issues the client was already experiencing and the trouble they had to go to get power, it was important for us to ensure we could install a solution as quick as possible.

As Terry Moore explains, “From seeing the advert and engaging with Powerguard, through to them visiting us to assess our needs, designing a solution and implementing it, the entire process took around two weeks. And, it’s been magic ever since. We get 24 hours of electricity each day!

“We dealt with Graham Chapman. He came down and assessed everything and provided us with a specification, which we later agreed. Once everything was signed off, it took them around 12 hours to install everything and get it all going. The entire process was quick and easy. Not only that, but to buy a new generator and all the power systems, plus the windmill, it worked out at around £14k – Much cheaper than moving to the National Grid and without the waiting time or disruption.

“If we’d have chosen to go on the National Grid it would have been a much more invasive job and taken them much more time. They would have had to set up boxes, put up poles, wired up the house etc. whereas, with Powerguard, all we had to do was have a cable running from the house to the shed which was hooked up to the system. Plus, with the six-month waiting list to go on-grid, we’d have spent so much more on diesel.”

Our experienced team successfully installed the new power system within 12 hours following sign off. The solution required very little maintenance and will be updated with the latest technology as and when required to ensure it remains up to date and works as well as it possibly can.

As Terry Moore explains, “We’re over the moon with the solution Powerguard provided, it’s a clever bit of kit. And, we’ve had little to no trouble with it at all. The support is fabulous and they’re very responsive. We have no complaints. All it costs us is around £20 a week, which is nothing compared to what we were paying.”

The new power system starts the generator up on its own and when the cycle is finished, it switches the generator off. It’s automatic and very efficient, saving the client a lot on fuel costs. In the case whereby the client requires more power, the system will recognise this and power up the generator to boost the batteries. It’s incredibly intuitive and able to rectify itself to ensure it provides consistent, reliable power. What’s more, they’re not affected by any national or local power outages, they get power 24/7.

Terry Moore continues, “We don’t have to do anything to it. We just have to top the batteries with water from time to time and feed the diesel in the generator. We’re advocates of Powerguard. They’ve been very good to us over the years and we know we’ve invested in a solution that will last us years!” 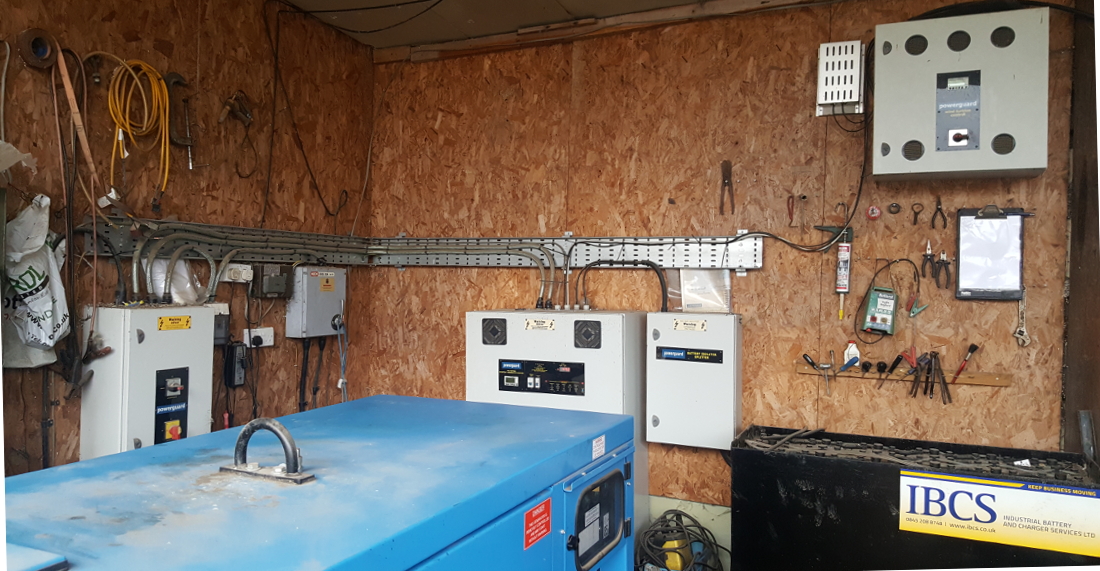